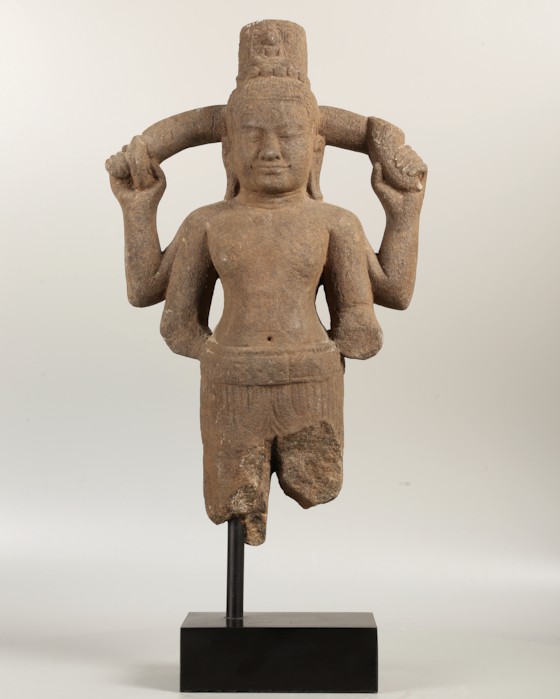 A brilliant period of renewal

Following a period of unrest, the reign of Jayavarman VII marked the beginning of an artistic, religious and cultural revival. Abandoning śivaism, the sovereign made Mahāyāna Buddhism the state religion. This change in religious paradigm encouraged artists to introduce iconographic and aesthetic innovations, which were embodied in architectural ensembles where monumentalism was the watchword. This brief period, brilliant as it was, saw its decline in the resurgence of the cult of śivism from the middle of the 12th century.

An image imbued with humanity

This bust of Lokeśvara, sculpted in the round, is part of the Bayon style, which began under the reign of Jayavarman VII. The Bodhisattva is dressed in a short sampot, and is recognisable from the Buddha Amitabha in his headdress. He has four arms, two of which are held by a hoop, a characteristic feature of Khmer art since pre-Angkorian times.

An expression of serenity emanates from this face with finely sculpted features. The Bodhisattva is presented to the viewer in a frontal attitude, following the traditional codes of representation. Lokeśvara’s benevolent air helped to put the devotee at ease in the sanctuary and to create a spiritual setting for meditation.

Carved from sandstone, this piece has been carved and polished in a refined and detailed manner, conveying the evocative power of the image to the viewer.

The cult of Lokeśvara, an embodiment of compassion

Influenced by India, the Khmers adopted not only their main religions – Buddhism and Hinduism – but also other aspects of their culture, notably the Sanskrit script. Thus, the Bodhisattva cult also spread to Cambodia.

Although it is known from the beginnings of Khmer art, it was during the reign of Jayavarman VII (r. 1182/3 – circa 1220) that the cult of Lokeśvara reached its peak. The adoption of Mahāyāna Buddhism as the state religion, which led to the construction of the Bayon temple, established a new stylistic paradigm. More naturalistic, the sensitively modelled sculptures are sometimes inspired by the features of the reigning sovereign or those of his entourage. Expressiveness and serenity of the images reign, which Buddhism endeavours to transmit.