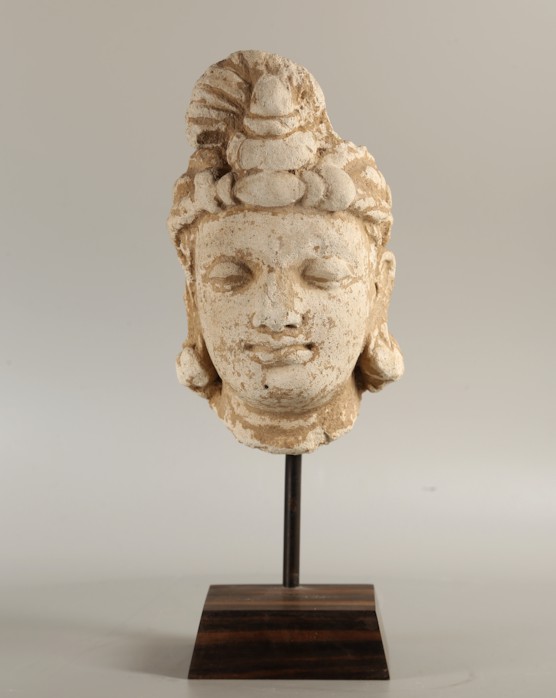 This stucco Bodhisattva head comes from the ancient Gandhāra region. Archaeological excavations have unearthed numerous stucco statues and fragments, revealing the importance of the use of this material in Gāndhāra.

This production, of which this head is a part, covers the fervent religious reality of the early centuries of our era in this region. The coroplasts inspire vitality in their works through a very sensitive treatment of flesh and modelling, formerly emphasised by polychromy, which has disappeared on this piece. The aim is to strike the soul of the spectators, to impress them, in a permanent search for the best way to touch the faithful, while humanising the image of the characters represented. The sculpted stucco elements were part of the decoration of architectural ensembles, temples or sanctuaries.

This paradigm shift originated in the development of a new religious trend, Mahāyāna Buddhism, also called Great Vehicle Buddhism. Bodhisattvas play a major role in this religious trend, and intervene as intercessors with the faithful. These Buddhas of the future, who delay the moment of their awakening in order to help the faithful in their spiritual quest, particularly favour the growth of this religious current. The latter now reaches a larger number of followers and is no longer reserved for an austere monastic elite. Like Mahāyāna Buddhism, religious art is based on a sensitive approach to representations, playing on the connivance with the faithful. The images of the Bodhisattva embody compassion, and the gentle art thus turns away from the elite.

The Bodhisattva, an image of compassion

This serene face, with half-closed eyes and a regular face, bears witness to a genuine concern for naturalism. His full lips, with deep corners, and his straight nose are all elements that illustrate the influence of Hellenistic art, which had a great posterity in the Gāndhāra. The head is topped with a turban, which is similar to the clothing of this region, creating a connivance with the viewer. Similarly, her earlobes are distended, and adorned with heavy earrings, another element that anchors this representation in the context of its creation while participating in the humanisation of this representation.

The syncretism of images

Coming from Central Asia, the Kuṣāṇa rulers (1st-3rd centuries) were the main patrons within this geographical area, and it was under their impetus that the art of the Gāndhāra underwent a formidable development. It was a real empire, which included territories from Uzbekistan to North India. This powerful kingdom was at the crossroads of many influences, notably from its Greek neighbours – successors of Alexander – in Central Asia, and then from the Roman Empire, which conquered these territories.

This syncretic style, so original in Buddhist art, enjoyed great posterity in the Gāndhāra, thus ensuring its popularity.