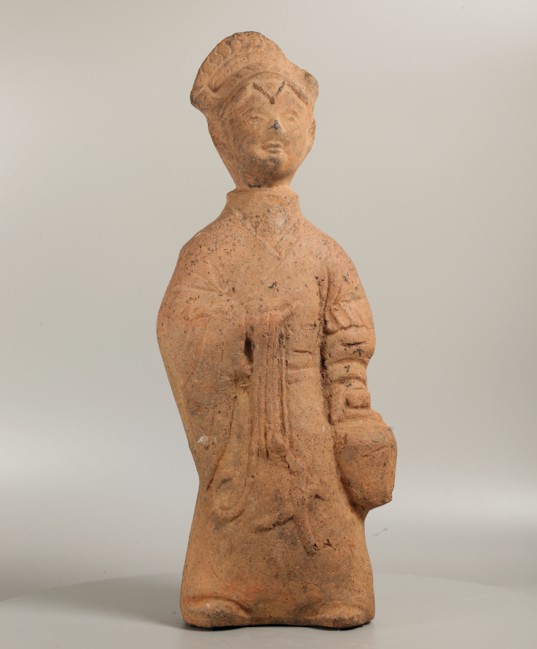 This terracotta figurine belongs to a specific category of works, which have a long history in China, called Mingqi. Han tombs have yielded a large number of such objects, which are thought to act as funerary substitutes. Mingqi appeared during the Eastern Zhou Dynasty (770-256 BC) and were originally intended to replace the human sacrifices that were commonly performed during the burial of elite figures in the Bronze Age. These figurines were supposed to accompany the sensitive soul of the deceased, called the po. As an integral part of the funerary furniture, whose importance increased over the centuries, the Mingqi reproduce the everyday world of the deceased and provide fundamental information on the way of life under the Han.

Like this young woman carrying a bucket of water, it is often ordinary people going about their daily activities that are represented in Sichuan, not without a certain sense of humour.

The treatment of the face is characteristic of Sichuan productions, whose gentleness and joviality are reflected in the soft features of this figure. The face is round, with a small heart-shaped mouth and a small, slightly pointed nose. His eyes have a sparkling look and are set under arched eyebrows.  Her hair is pulled back in two strands on the forehead, while the rest of the hair is hidden under a very detailed headdress. The clothing is characteristic of Han productions, and is composed of a superposition of intertwined robes with wide sleeves. These details reveal what was the fashion of the Han period.

Made of clay in a mould, this figurine bears witness to the technical skills of Sichuan craftsmen in the Han period, who breathe vitality into these human reproductions, while insisting on the graphic aspect of the treatment of the garment.